The Secret to Everything Tasting Better

Indian mothers like to feed their babies by hand… Is Everything More Delicious When You Eat With Your Hands? via The Salt : NPR

The middle-classes are now as likely to save for a Michelin-starred meal as for a holiday, according to a study on fine dining… Fine dining ‘no longer the preserve of high society’ via Telegraph 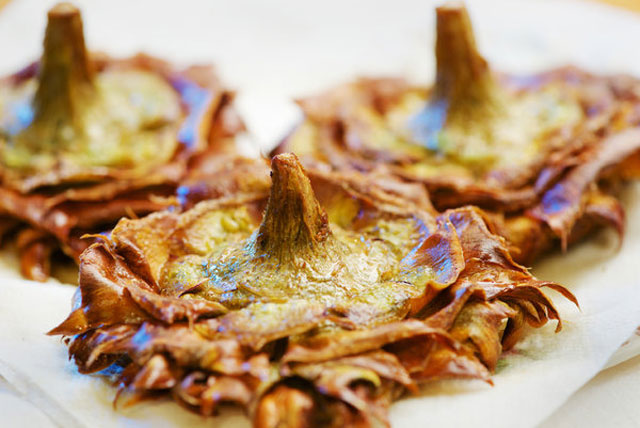 Artichokes fried in the Jewish style, or carciofi alla giudia, a traditional dish of the Roman Seder… For Passover, Fried Artichokes via NYTimes.com

Haughty waiters, hushed rooms and and starched tablecloths are a thing of the past; today’s top chefs are all about casual dining… Fine dining’s identity crisis: is this the end of posh restaurants? via theguardian.com

Was there anything that you thought you wanted to do before you started cooking? The ‘Curious Q A with Ferran Adrià via Epicurious.com 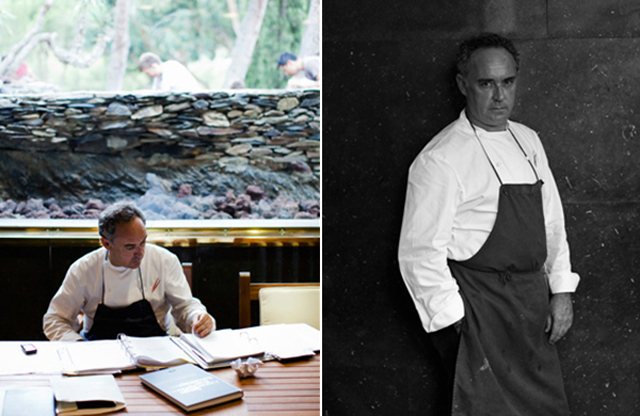 Will you be ordering the green spaghetti or blue turkey? Green Spaghetti, Blue Turkey and Pink Cereal: Food Photos Freakify the Everyday Meal via Feature Shoot

What if taking photos of your food could serve a real purpose besides helping you brag on Instagram and Facebook? New Tech: Snap a Pic of Your Meal, Find Out How Many Calories It Has via Delish.com

“My therapist told me the way to achieve true inner peace is to finish what I start. So far today, I have finished 2 bags of M&M’s and a chocolate cake. I feel better already.” ~ Dave Barry 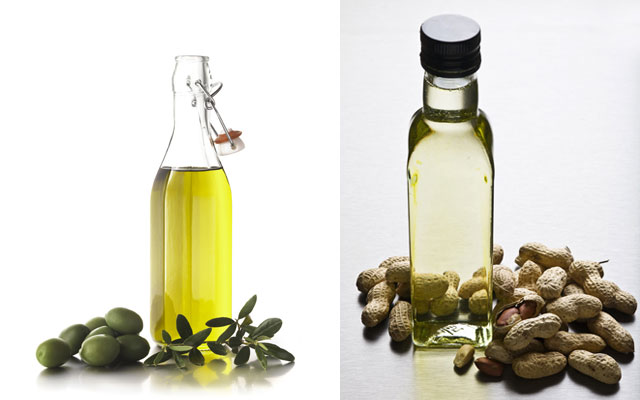 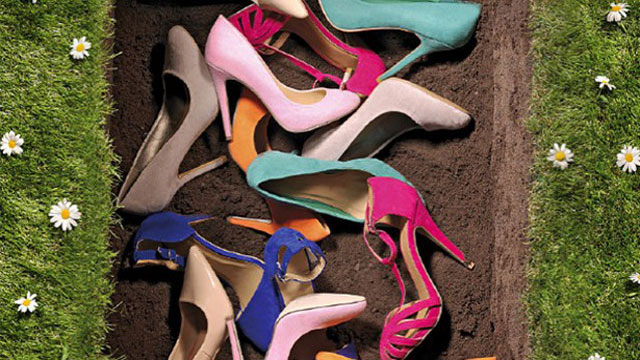 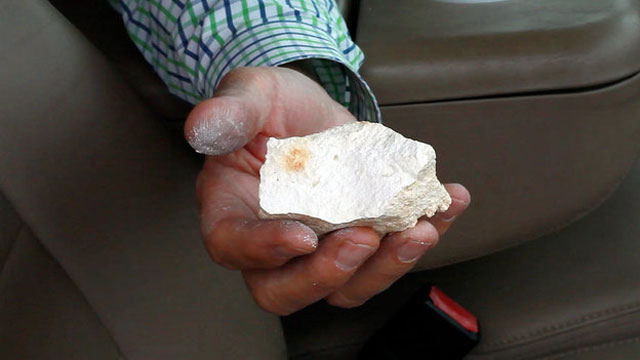 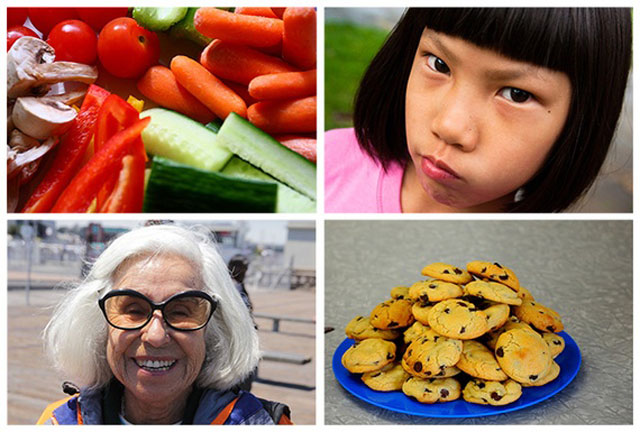 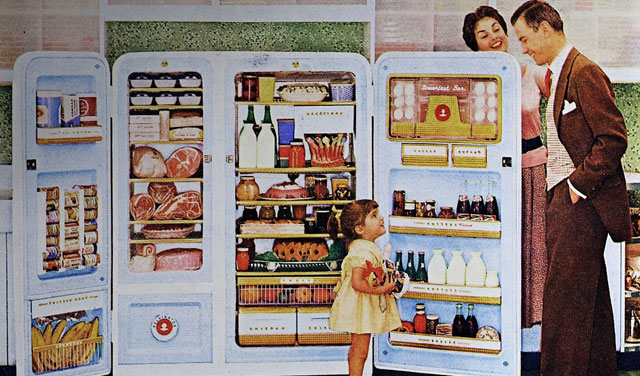 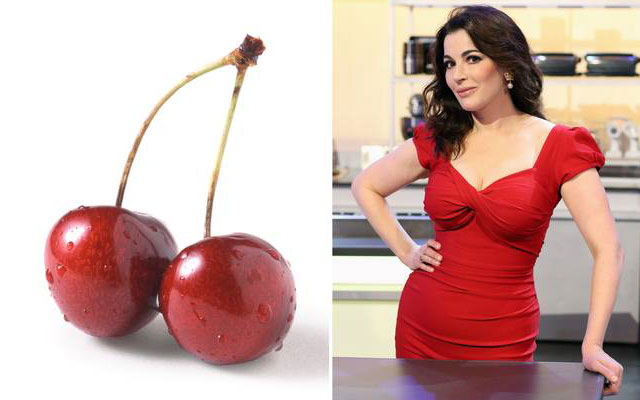 So what should never miss from our shopping list? Here you will find a short list of what we think is essential for a healthy-balanced-fitness-yogi… Top 10 healthy foods to have in your fridge via Swide

A humor article turned it into a cliché-filled reality that will either have you laughing or crying… or both… Humor: Hilariously Accurate Generic Brand Video Put Together from Stock Video Clips via petapixel.com 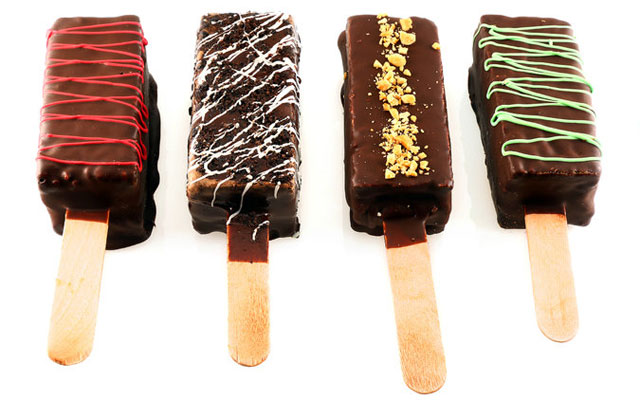 “It’s like the quest to create a new smartphone, but in food”… A Real Treat or Half-Baked? via NYTimes.com

Everyday foods you didn’t think were healthy (but actually are), and some splurges without guil… 12 ‘Unhealthy’ Foods Nutritionists Eat via TIME.com

Nutrition history is riddled with nonsense… Top 5 Contenders For The Worst Nutrition Advice in History via authoritynutrition.com

“Read the directions and directly you will be directed in the right direction.” ~ Lewis Carroll 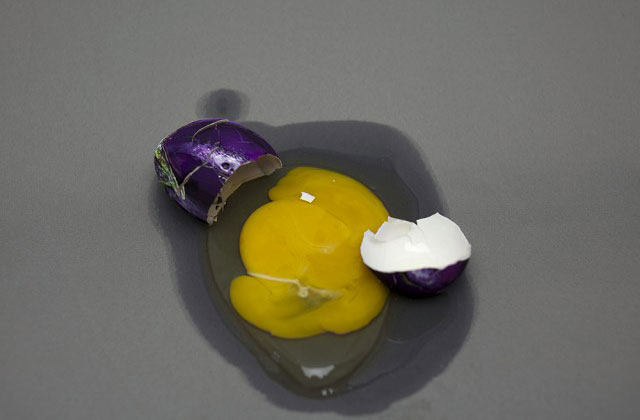 Could sound replace sugar? And what kind of music should restaurants play?… How sound affects the taste of our food via theguardian.com

Not The Only Culprit: When it comes to calorie for calorie damage to the environment, broccoli’s not that far from cattle… Which foods are the worst for the globe? via Stuff.co.nz

Irish Cocktail: A Classic Drink for St. Patrick’s Day. In addition to Irish whiskey, the Irish Cocktail is made with maraschino, orange curacao, and a touch of absinthe, plus a little Angostura thrown in for good measure… via Serious Eats: Drinks

“Monastically absorbed in the work of breaking down the day’s fresh ingredients—cracking open sea urchins with pliers, skinning a live octopus on a gleaming prep table…” A Day in the Life of Daisuke Nakazawa via WSJ.com 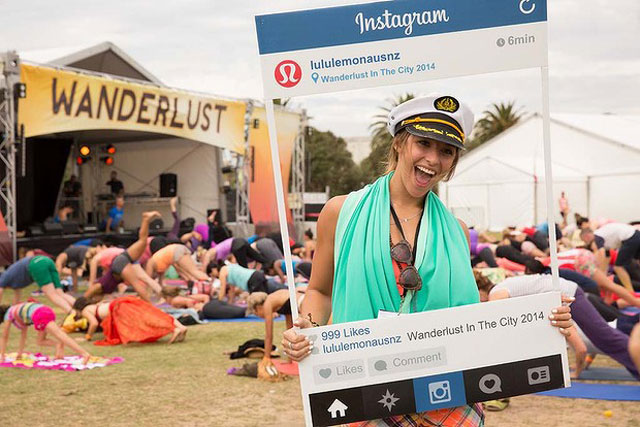 Is it a posture? Is it an outfit? Is it a mantra? Is it a bunch of words strung together in a certain way?… Bottoms up for beer and yoga via smh.com.au

The culture of celebrity chefs is creating a generation of couch potatoes… TV chefs are turning people into couch potatoes: British chef via The Straits Times SoShiok

“But without deeper reflection one knows from daily life that one exists for other people–first of all for those upon whose smiles and well-being our own happiness is wholly dependent, and then for the many, unknown to us, to whose destinies we are bound by the ties of sympathy.” ~ Albert Einstein, Ideas and Opinions 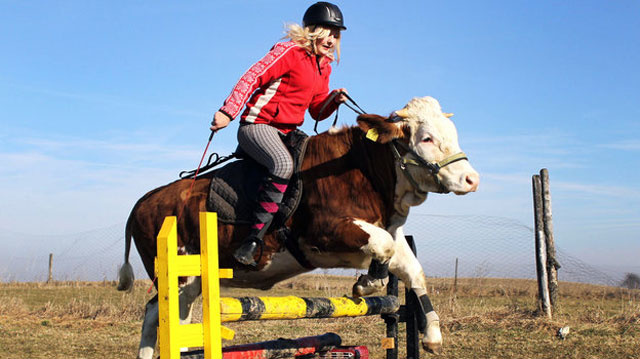 The Secret Lives Of Cows: Jumping For Joy… It’s a moving scene, given the cows’ backstory. But is it “literally jumping for joy,” as the title puts it? via The Salt : NPR

Terra cotta amphorae are the latest innovation in experimental winemaking. Coming Soon To A Wine Near You: Ancient Amphorae… via forbes.com 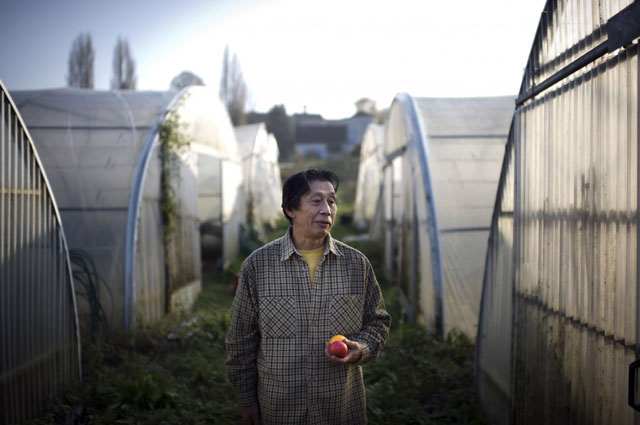 World Book Day: the best fictional drinks. Drink up: Alice considers taking a sip of a mystery potion during her visit to Wonderland… via telegraph.co.uk 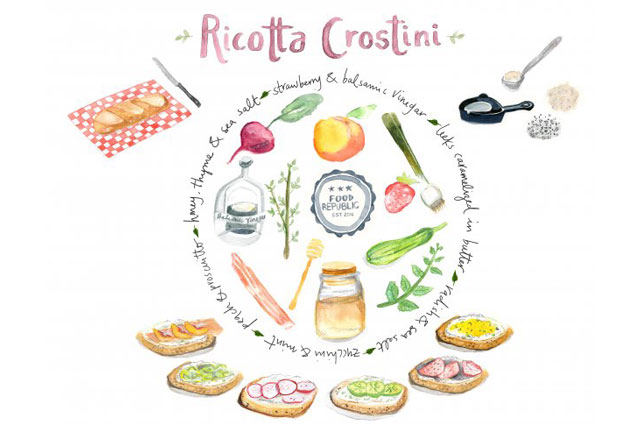 Illustrated Guide: How To Make A Ricotta Crostini, Plus 5 Essential Toppings. The perfect snack for just about any time of day… via Food Republic

Think Your Apartment Is Small? Check Out These Super-Tiny Hong Kong Houses. But they’re not some project in urban microhousing… via Co.Exist 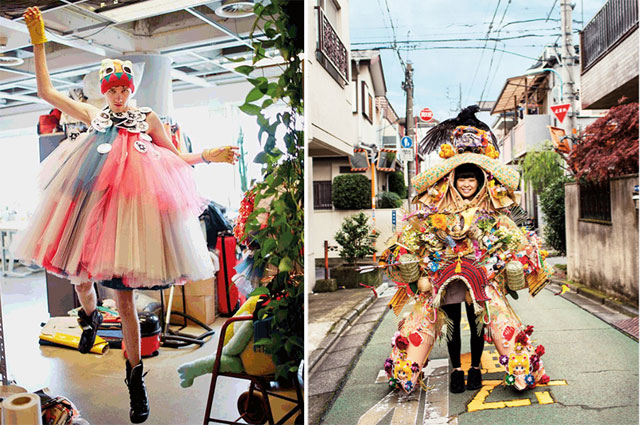 This Man Has Survived on Pizza Alone for 25 Years. Everyone who knows Dan wonders how he’s still alive. Beyond the fact that his diet is completely horrifying… via VICE Canada

“By then I knew that everything good and bad left an emptiness when it stopped. But if it was bad, the emptiness filled up by itself. If it was good you could only fill it by finding something better.”
~ Ernest Hemingway, A Moveable Feast

Young guns in the city who have turned their passions into professions, creating drool-worthy wonders in the kitchen… What’s cooking, chefs? The Hindu 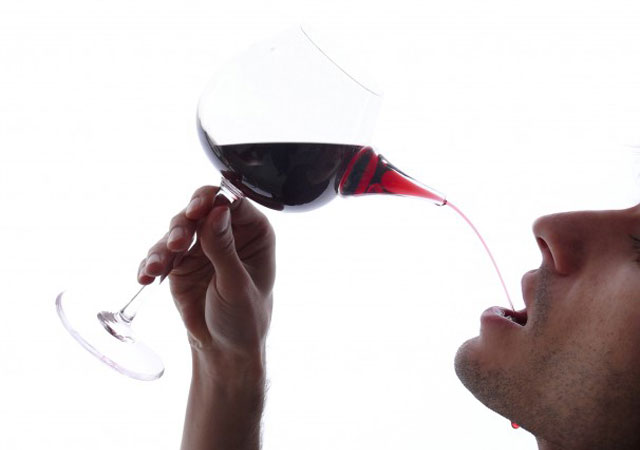 Spanish culinary design is full of jokes, but that’s all the more reason to take it seriously… Tapas: Small bites of Spanish design | The Washington Post 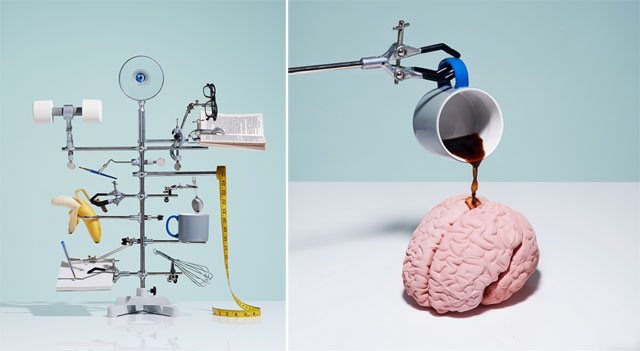 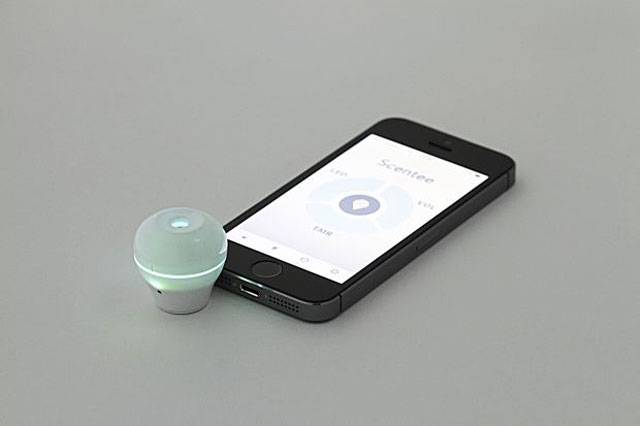 After a successful career in photography, The Dutch’s pastry chef Kierin Baldwin pursued her love of desserts fulltime while working at Cafe Boulud… How The Dutch Bakes The Perfect Winter Pie, In Animated Gif Format | Food Republic

In a tireless pursuit of food facts, there are certain truths that are somewhat very alarming… Insects In Peanut Butter, And More Food Facts That We Refuse To Believe… | huffingtonpost.com

“Life is a series of natural and spontaneous changes. Don’t resist them; that only creates sorrow. Let reality be reality. Let things flow naturally forward in whatever way they like.” ~Laozi